I've been enjoying my recent forays back into the world of crochet and was thinking that it would be good to have a little "creating" goal to work towards each month.  So I'm setting myself a challenge over the course of 2021 to make something every month, even if it's only something small and quick.  Of course, I'll still be trying to bust that stash of yarn with more blanket-making but I'm really not good at just sticking with one thing at a time 😄  Having a goal to make some other little "somethings" each month will hopefully help to satisfy that butterfly mind of mine }i{
It's pretty obvious that I mostly crochet but there are lots of other crafts out there that I would really like to try out.  I used to do a lot of cross stitch and it would be nice to take that up again ~ perhaps I could concoct my own chart incorporating my favourite tea phrase!  Mind you, I think any cross-stitchy stuff will take longer than a month to complete 😉
Perhaps you too have things you would like to make?  If so you are more than welcome to join in with me ~ I would love to hear about what you are creating ~ and I won't feel quite so lonely in my little self-imposed creating challenge!
Posted by SharonLarkin at 08:31 No comments:

Email ThisBlogThis!Share to TwitterShare to FacebookShare to Pinterest
Labels: A Monthly Make 2021, making 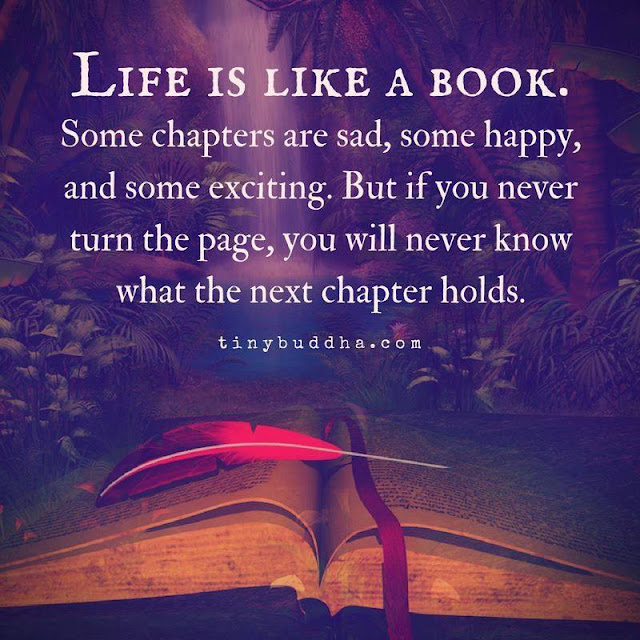 Posted by SharonLarkin at 05:00 No comments:

Email ThisBlogThis!Share to TwitterShare to FacebookShare to Pinterest
Labels: poetry and quotes 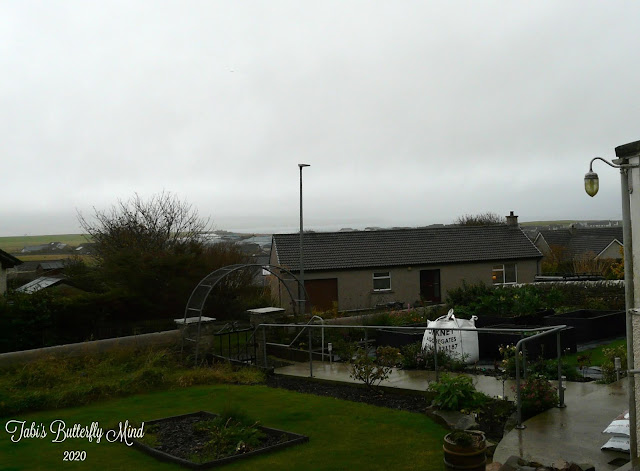 It's wet, chilly and grey.....and sadly, no view of the sea today.  Still, on a day like this there are no feelings of guilt for not getting out in the garden 😉  I've got things I could pootle about doing in the house but here I am, surfing the web instead LOL  Oh well, it's good to have some slow days mixed in with the busy, busy ones! 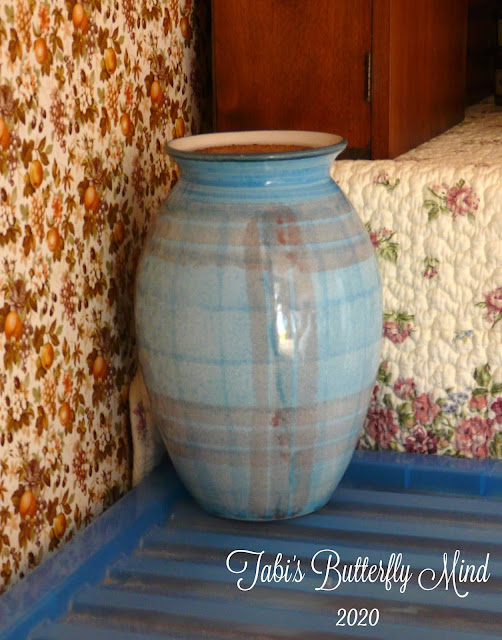 Our boy is back home where he belongs, too.  Beverly picked up Matty's ashes for us from the Northvet surgery in Kirkwall, as the Stromness surgery was closed for a few weeks during lockdown.  Amber and Nikki's ashes are both in little wooden caskets but I think this pottery container is much nicer.  All three are now in a cupboard in our bedroom and the plan is that whichever one of us pops our clogs first, the dogs' ashes will go in our (joint) plot at the same time.  Might all sound a bit morbid to some folk, I guess, but Adrian and I have always been open about our wishes for when the end comes.  Hopefully, though, we both have a good few more years left on the clock 😉
Posted by SharonLarkin at 12:21 No comments:

Wear a Mask (Be Our Guest Parody)

Just couldn't resist sharing 😉
Posted by SharonLarkin at 11:54 No comments:

Email ThisBlogThis!Share to TwitterShare to FacebookShare to Pinterest
Labels: a little bit of fun, health 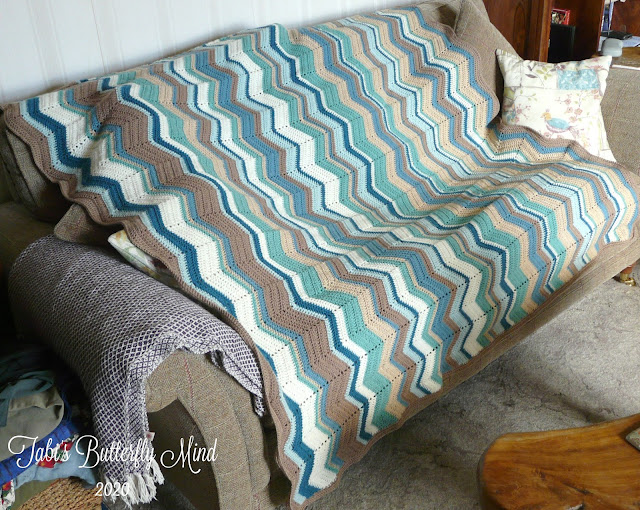 Ta daa ~ the first stash-busting blanket is finished!  I love this blanket...and so did Beverly when she spotted it LOL  So, guess who's getting this for Christmas 😉  It does go rather well with that cushion on our sofa, though..... 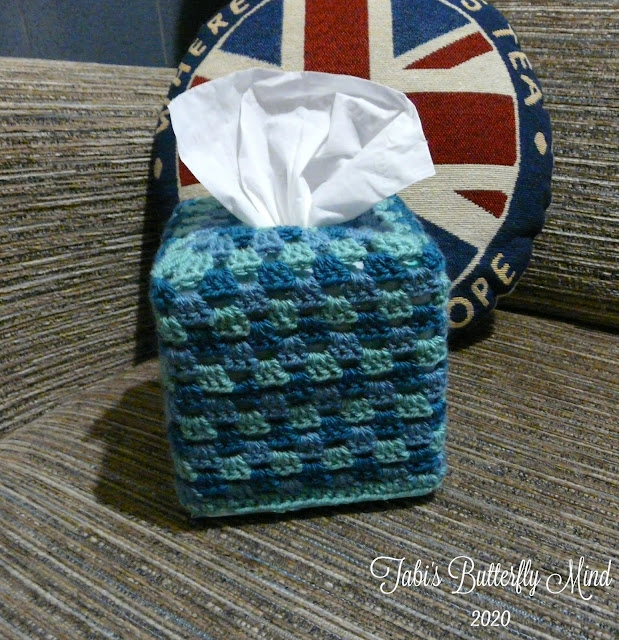 I made a rod for my own back started a Christmas tradition for Beverly a few years ago: "Christmas-every-day" ~ which is basically a little gift I've chosen for her to open each day in December up to Christmas Day.  I have decided to make a few of the gifts this year, and this tissue-box cover is one of said handmades.  She has been nagging asking me to make her a couple of square covers for a while, as the tissues she now buys come in square rather than oblong boxes.  She chose the colours herself from my humungous yarn stash, and this is the first one.  I have made a few oblong covers from a pattern by The Royal Sisters but they don't have a square pattern.  I was able to find one, though, for a Santa-themed cover which I just tweaked a bit 😊  I have another one to make for Beverly, in a different colourway, and I'm going to make a couple for myself too. 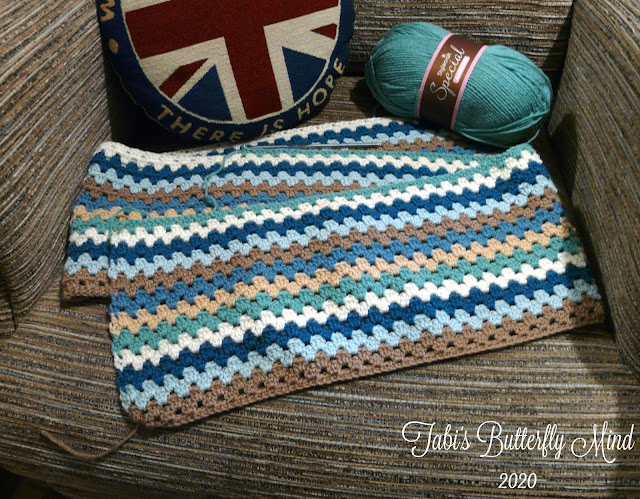 I've started on another blanket in that same colour combination to put on our own sofa.  After all, those colours do go extremely well with that cushion we have 😉  The pattern is a simple granny stripe from Granny Square Crochet by Catherine Hirst.  It's actually for a scarf but the pattern length worked out beautifully as the width for a good-sized lap blanket.  I'm simply going to keep on crocheting the stripes until I reach a length I'm happy with, ending with the same colour I started off with.  The scarf pattern has a nice edging which I shall probably use, too, to give the blanket a neat finish.  I shall use the beginning and end stripe colour, Mocha, for the edging. 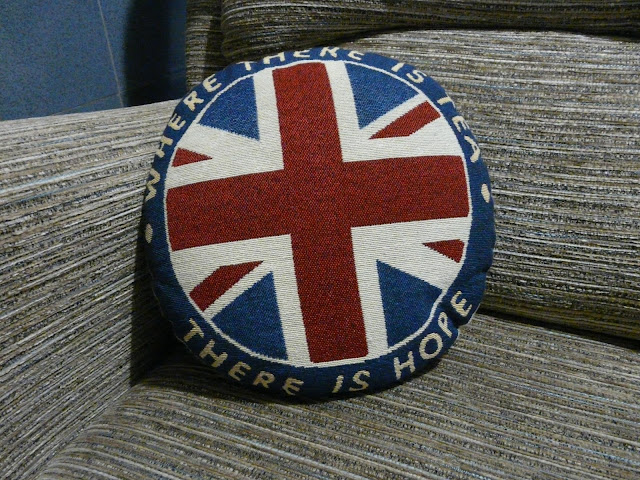 Do you like my little cushion, by the way?  I've had it for a few years ~ I got one for Beverly at the same time.  Although I'm not really a fan of Union Jack-themed stuff I really liked the sentiment, it just seems oh so very British doesn't it!  I wonder if I could incorporate the phrase into a cross stitched picture ~ another project to add to my never-ending list methinks 😄
Posted by SharonLarkin at 10:31 No comments:

Email ThisBlogThis!Share to TwitterShare to FacebookShare to Pinterest
Labels: prayers

...and yet there is still beauty to be seen in the garden borders.  Some folk find autumn to be a rather sad season, where the voluptuous bounty of summer rapidly fades away, but really it's just the garden taking off it's clothes and pulling on it's pyjamas ready for the long refreshing sleep of winter.  And before we know it spring will be here once more, and we can renew our friendships with all of our beloved plants 😊 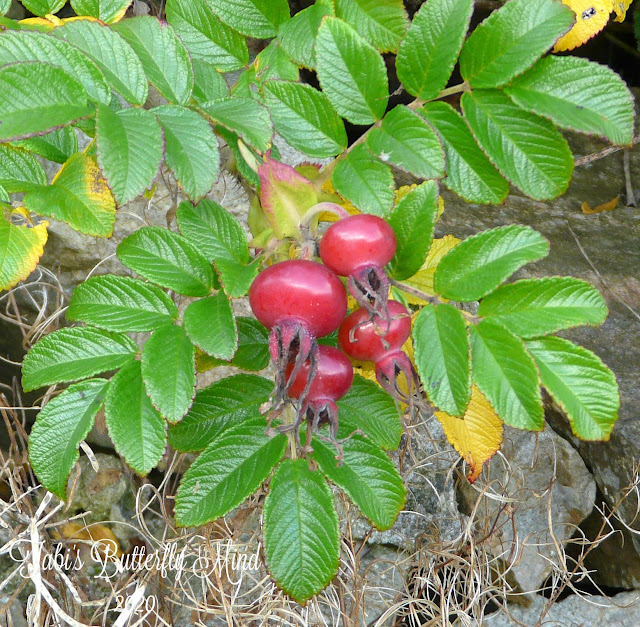 I love the glossy red hips of rosa rugosa ~ as do the blackbirds if the half-eaten remains left on the lawn are anything to go by!  These are actually growing in our neighbour's garden but we get to share the beauty of their blooms.  The hips always remind me of my Mum telling me how much Dad liked the rosehip syrup I had as a baby 😄  I wonder when ~ and why ~ giving rosehip syrup to babies stopped being a thing?  I know it certainly wasn't something I gave to the gruesome-twosome almost 30 years ago (omg, how can my kids be nearly 30 years old 😲), so things must have changed sometime between the early 60s and early 90s. 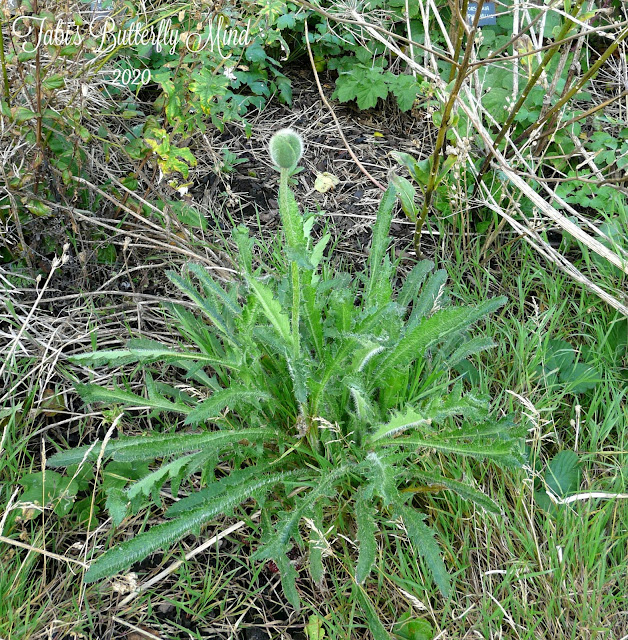 I was having a poke around in the ornamental garden that is currently masquerading as a wilderness when I spotted that this poppy had decided to have a second flourish of leaves ~ and pop out a flower bud, too!  I have read that if they are cut back after flowering is finished then some poppies will have a second flush in August but I think this one has left it a bit late this year! 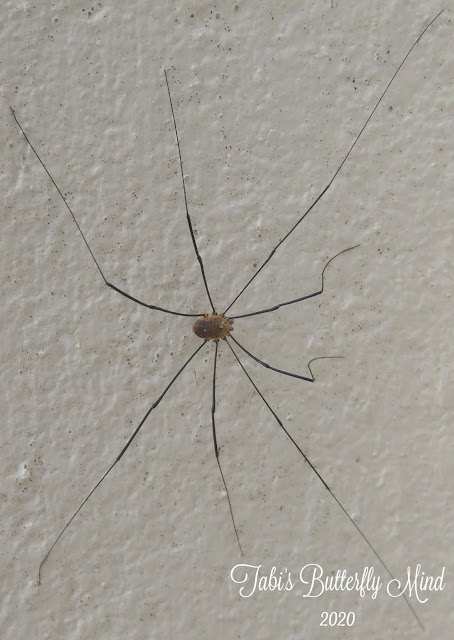 Apologies if you are arachnaphobic ~ I'm not that keen on the eight-legged little beasties myself, to be honest.  This one, though, wasn't really scary despite it's looooong legs and apparently isn't even a spider!  It's a harvestman according to the RSPB, and they are Opilones, which is a group of arachnids closely related to spiders 😉
Moving swiftly on from that little natural history lesson... 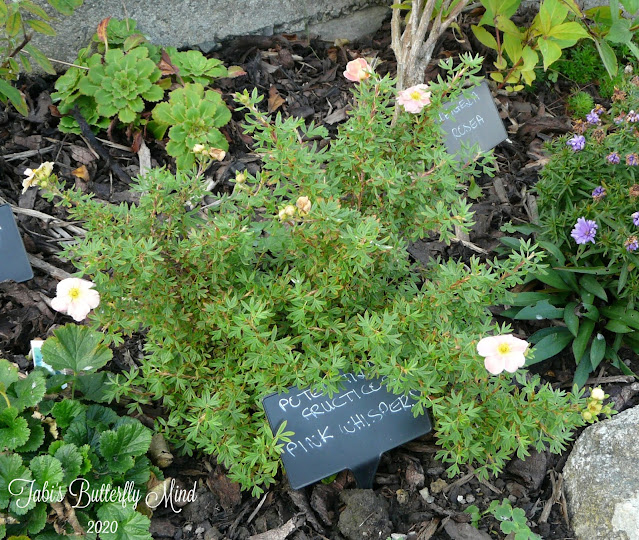 ...take a look at something that's much prettier than a spider-that's-only-pretending-to-be-a-spider, a sweet little potentilla Pink Whisper.  The bees really like potentillas, I guess it's easy for them to get to the pollen with those flat open flowers. 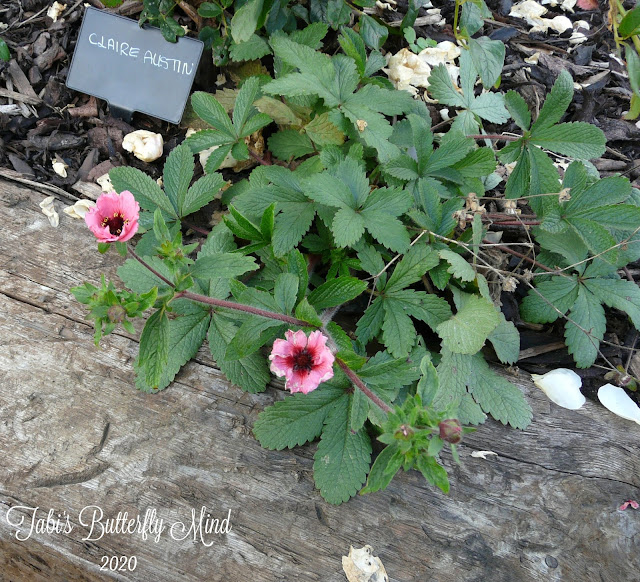 This is potentilla nepalensis Miss Willmott.  It's a very different-looking plant to Pink Whisper despite them both being in the potentilla family. 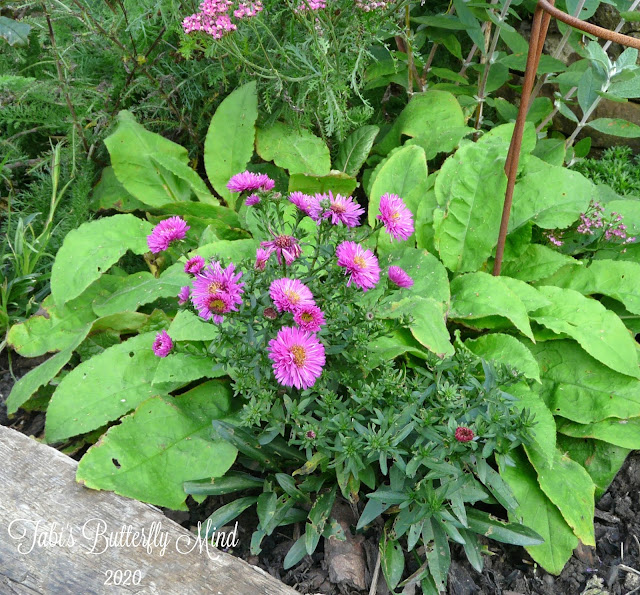 Autumn is, of course, the season for asters.  This is aster novi belgii Jenny. 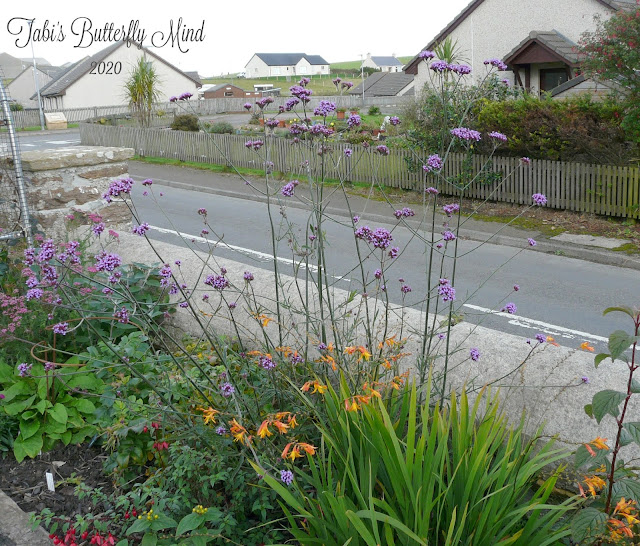 The verbena bonarensis is still going strong.  We've had some high winds but it seems to cope admirably.  I love the way it is rising up behind the montbretia, and the contrast of the blue against the orange 😊 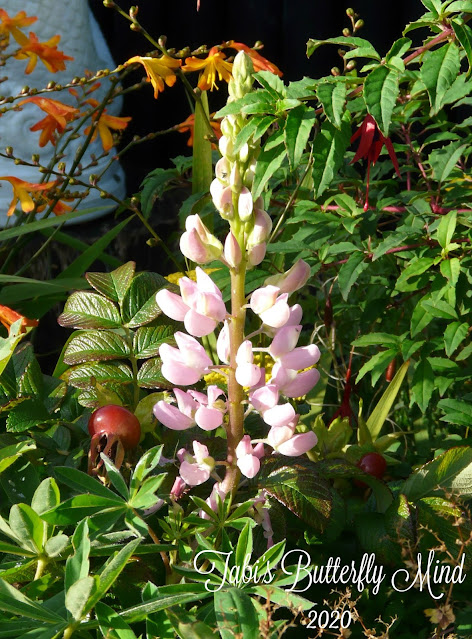 Despite being moved all the lupins bloomed, and some have even put out a second flush of flower spikes. 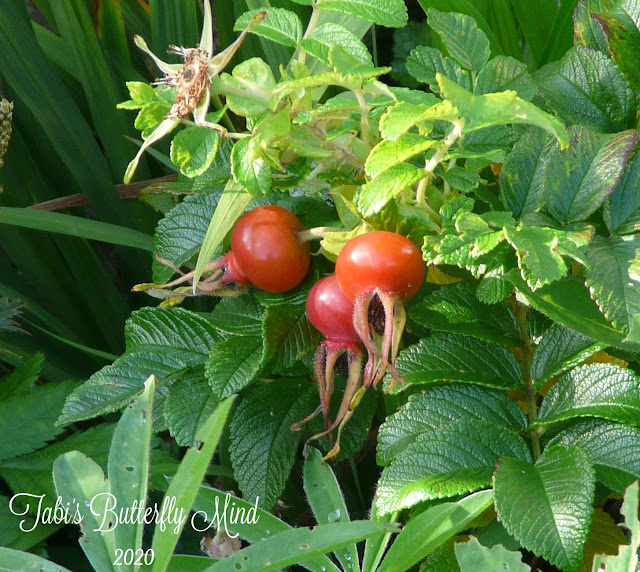 More of those beautiful rosa rugosa hips, this time in the bed beside the pond. 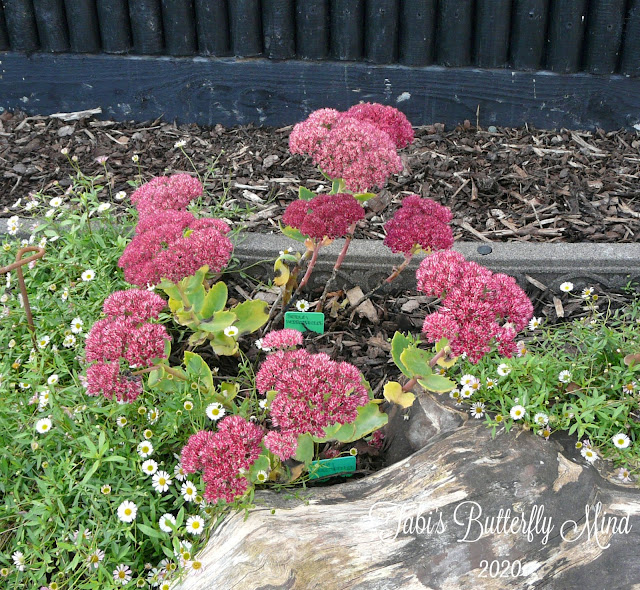 It seems that the sedums Autumn Joy turn a deeper red every day. 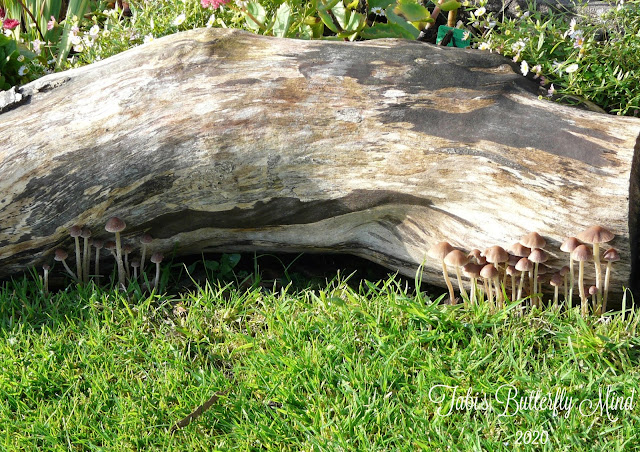 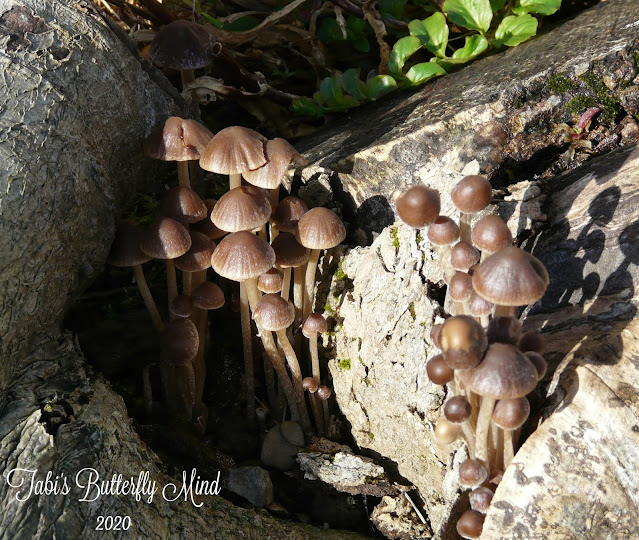 We've had masses of these cute little fungi this year. 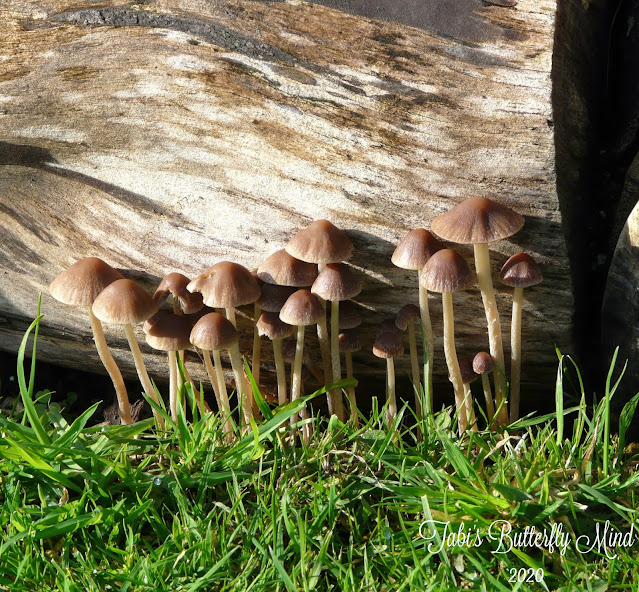 I don't know anything about fungi, I'm afraid (other than the ones in the supermarket are very tasty 😋), but have been told that these are probably from the Coprinellus family.  They like to grow on or near rotting tree stumps. 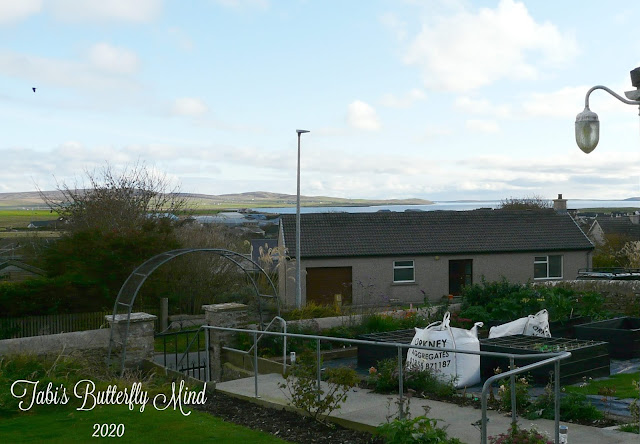 And finally, I couldn't resist taking a photograph of the view from our house.....we are very lucky to live here 😍
Posted by SharonLarkin at 13:37 No comments: 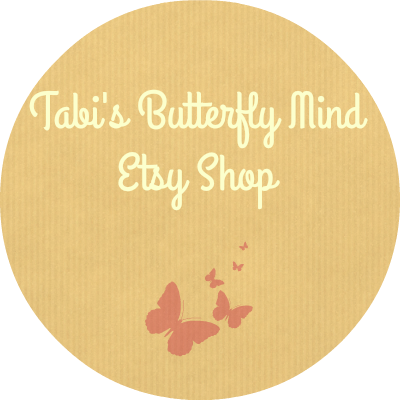 ...be nice and do not copy my ramblings or photographs without first seeking permission ~ thank you!

Some of my favourite blogs... 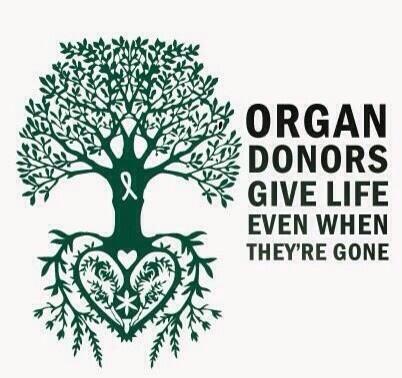 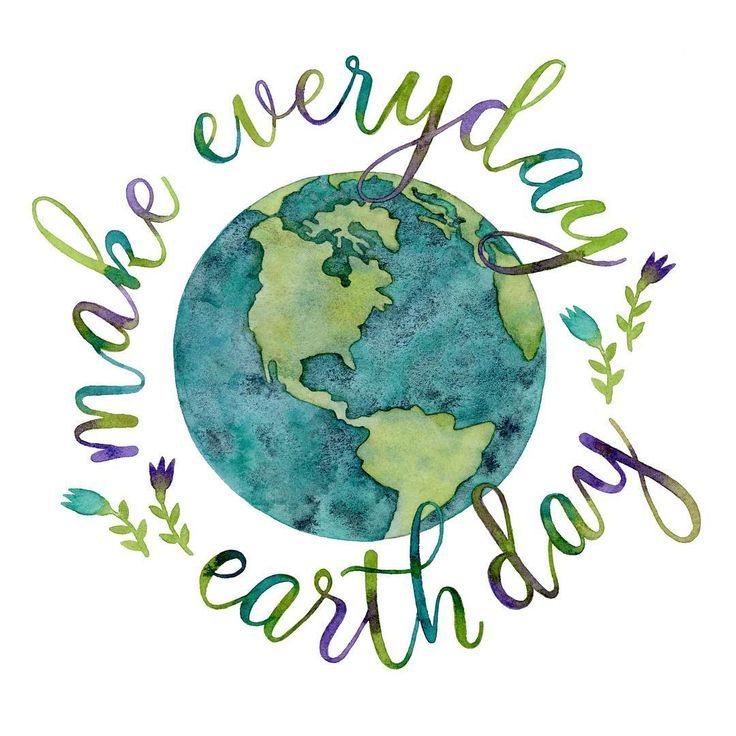